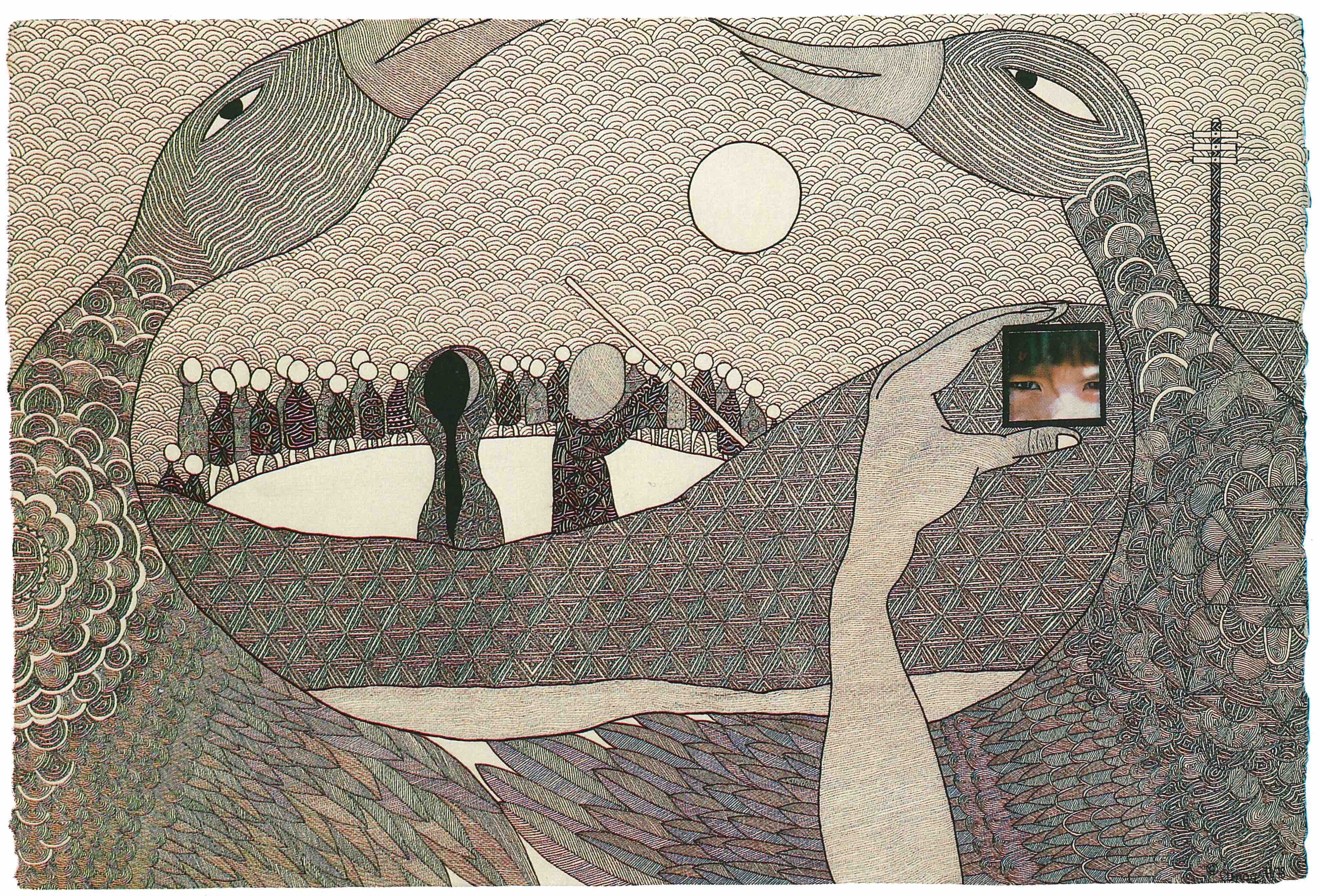 Looking for Arnannguaq Høegh in 1978

Visitors to Kissavaassat near Sisimiut during the summer of 1978 would have encountered some unusual drawings by Arnannguaq Høegh among the Aasivik festival tents. In a photograph from 1978, we see her delicately positioning one of these drawings onto a humble exhibition wall. A curled, fetal figure stands out from the whirlpool of branches, beaks, almond-shaped eyes and ultra-thin pencil strokes that flutter across the page. A child at the center of a drawn universe? But the precise curves, thick outline and perfectly spherical head also convey an abstract quality, eerily geometric, too exact to be real.

In one of her only published artist statements, Arnannguaq Høegh introduced herself by quoting Pablo Picasso: “Every child is an artist. The problem is remaining an artist once one grows up.”[1] Maybe she was thinking of this in 1978 while she displayed work from one of her earliest graphic series. We can only guess. Without her voice to guide us, there is much we will never know about the rich, intellectual and deeply private images she produced throughout her over forty year-long career. As Nivi Christensen has written, Arnannguaq Høegh’s sudden death in 2020 left a hole in Greenland’s art history that will be difficult to fill.[2]

Perhaps one way to begin honoring her decades of work is simply to look. Her intellect, skill and interest in unconventional composition are visible everywhere, including in her earliest projects, which are particularly vulnerable to being forgotten. It is important to honor all periods of Arnannguaq Høegh’s life and work, but what can we learn in particular from looking at her early drawings and prints, produced at a formative moment in her practice?

Look at one image that Høegh showed in an exhibition of work by women artists in 1988 and you will notice a rectangular shape behind a bird’s fan-like plumes. Look closer and you will see that it is actually one rectangle inside another – a frame – attached to two angular lines like a picture hung on a wall. Within the frame, a group of oblong curves almost suggests the abstract portraits Thue Christiansen painted during the 1980s and 1990s, or maybe the drawings of Picasso, Joan Miró and other artists she studied during her extensive training.

Like much of her work, this image demonstrates how art brings different levels of experience into contact. The picture-within-a-picture reads like an artist’s inside joke. It reflects her appreciation for the conceptual qualities of graphic arts, a medium that requires the artist to repeatedly layer one surface onto another. (In most forms of printmaking, images are transferred from an original drawing to the surface of a printing block or impression plate, and finally to paper.) This is just one example of Høegh's ability to deliver sharp, academic observations of her chosen medium with a sense of humor and tenderness.

A similar combination of cleverness and intimacy led her to draw a hand extending into the image from the left, as if reaching into the picture from the outside world. When I see this I remember how Stine Lundberg Hansen described Arnannguaq Høegh’s affection for birds, ravens in particular, which she called kammalaateeqqakka.[3]

Returning to the festival tent, how should we view these intimate yet formal, even academic images in a context like Aasivik, the cultural and political festival founded as a “people’s forum” during the politically turbulent 1970s?

Arnannguaq Høegh exhibited her prints and drawings during at least one other Aasivik, Aasivik ’80 at Niaqornap Kuua, near Qoornoq. The theme in 1980 was “Support Inuit Unity,” and for the first time guests from ICC and the American Indian Movement were joining the usual Aasivik speakers.[4] The connection between this context and the drawings becomes clearer when we consider she partly worked on this series during a residency at the famous printmaking workshop in Kinngait (Cape Dorset), present-day Nunavut, Canada. Later, as leader of Eqqumiitsuliornermik Ilinniarfik (Kunstskolen), she regularly supported cultural exchange across Inuit regions, including organizing a study trip for students to visit the famous carving workshop in Uelen, Siberia in 1990.

The elongated line drawing in portions of these images produced between 1974-76 suggests parallels with artists working in Kinngait during this period, such as Kenojuak Ashevak and Pudlo Pudlat. Studying at a thriving, international Inuit graphic arts community was no doubt important for Høegh’s artistic development, but it only partly explains these complex images.

In each example from this series, which she began before travelling to Kinngait, stark lines break the image-space into irregular, abstract shapes, each filled with extremely thin pencil strokes that produce mesmerizing hatched and fish scale patterns. Her lines leave almost no negative space on the paper, unlike most printmakers working in the Eastern Canadian Arctic in the 1970s, who generally used white or color blocked backgrounds.[5] (On the other hand, a contemporary artist from Kinngait whose work beautifully complements Høegh’s practice is Shuvinai Ashoona).

Arnannguaq Høegh undoubtedly drew inspiration from artistic happenings on the other side of the Davis Strait, but she unmistakably remixed these styles with her own, independent point of view.

She also contributed her distinct style to the social realist tendencies that flourished during the 1970s and 1980s among other West Coast artists who, like Høegh, studied under the Danish painter Bodil Kaalund.[6]

The core principle of social realism is a commitment to representing the truth of everyday life, from its uplifting moments to its most alienating and degrading conditions. Today, Arnannguaq Høegh is most well-recognized for imagery that focuses on small-scale details of objects connected to realist themes.[7] These images also challenge us to question what is the style of a realist image. To many, the grainy close-ups that fill her later prints might appear more abstract than “real.” By enlarging the decorative texture and materiality that suffuses even the roughest everyday objects and scenes, she shed light on easily disregarded elements of daily life that are rich with information and history.

In the 1990s, Høegh began experimenting with phototransfer techniques such as photogravure and photopolymer that allowed her to further manipulate notions of realism. One example from the 1970s series foreshadows her later interest in photographic references. A cropped photograph, a close-up of eyes peering directly into camera, is perched atop this drawing. A naturalistic arm seems to hold the photograph in the image’s shallowest dimension, in front of the wings of ornamental geese that frame an assembly of abstracted people in the background, their oval heads looking up to what must be the sun.

Held up to meet the viewer’s gaze, the photograph gives the scene a presentational quality. These eyes confront us, acknowledge us – they make us aware that the artist is aware of us, looking. They tell us that we are not looking into an unmediated or “pure” scene. This is a construction, a deliberately constructed image. The framing devices accentuate this self-reflexivity, as does an electrical pole in the background, a fragment of everyday life in the middle of the scene’s high drama. These disparate references – from vernacular objects to the symbolist ornamentation that Høegh associated with ancestral heritage[8] – somehow don’t clash. They coexist in the image, as if they have assembled for the purpose of demonstrating that such diverse artistic forms can in fact share space.

Another work from this series presents an even more complex composition. Unoutlined owls and branches soar into a fish scale-patterned sky. A humanoid figure whose head appears to be connected to wires stands beside a flock of geese, with partial faces floating eerily amid hatched waves or hills. In the lower left corner, an open door rises above an industrial harbor complete with oil storage tanks and satellites, perched atop terrain that dissolves into undefined pattern. The doorframe’s telescopic illusion makes it unclear if it is receding or protruding into the scene, and whether whatever is entering or leaving is welcome.

Arnannguaq Høegh occasionally left clues like this that allude to deep, tumultuous emotions lying beneath the surface of her images. For instance, a statement printed to accompany her phototransfer project Kotzebue à la ’86 – Soornami suggests that “on this exact spot,” the site depicted in the artwork’s eight repeated panels, “something disturbing and terrible once happened.”[9] In another, earlier image, which was included in a poetry collection published in 1974,[10] a woman lies exposed, nude, beneath the wings of a bird while a second figure sheds tears in the background. Their bodies, and the entire scene, are filled with countless lines, all of which Høegh would have strenuously traced by hand. The patterns are almost overwhelming.

In the drawing from 1975, the faces that emerge from a blizzard of lines, the wires that bind the figure’s head, the open door above the cityscape – these details convey a thoroughly ambivalent mood. Nothing is revealed for certain, but the visual subversion and optical labyrinths Høegh included in this image leave no doubt as to why Bodil Kaalund associated her with a surrealist impulse.[11]

Like the work of early twentieth-century surrealists, the scene does not represent a non-reality, but a denaturalized expression of the everyday. (As André Breton wrote in the first surrealist manifesto, the aim of French surrealism was to express the direct reality of the unconscious mind: “Surrealism relies on the belief in the superior reality of certain forms of association neglected until now, in the omnipotence of dreams, and the disinterested games of the mind.”[12]) The unsettling enigmas and hybrid creatures that appear next to expected, but unconventionally stylized arctic fauna, the ornamentation that Høegh drew from ancestral material culture, and a matter-of-fact picture of urban subarctic life – all of this speaks to the many influences, and the ghostly ambiguity, that surround contemporary life.

On a more general level, these early drawings indicate the curiosity, experimentation and intensive study that Arnannguaq Høegh brought to her practice throughout her lifetime. In them we see her mastery of naturalistic figuration as well as abstraction, her self-reflexivity, her sense of history, her keen perception of her contemporary moment on the cusp of Home Rule, with all its uncertainty, possibility and social tension.

At the very beginning of her career, Høegh asserted that geometric pattern, ancestral heritage, industrial infrastructure and unsettling, ambiguous imagery are equally significant subjects for artistic reflection. None of these subjects appears more or less at home in her drawings, more or less authentic to the kaleidoscopic scene. In these works, and in many more images produced over the decades, Arnannguaq Høegh has left behind an open door, one we must now pass through without her.

David W. Norman is a historian of modern and contemporary art. He received his PhD from the University of Copenhagen in 2020 and is currently a postdoctoral researcher at the Department of the History of Art at the University of Michigan, where he is working on a book manuscript with the working title "Home Rule Contemporary: Experimental Art and Self-Determination." He has written for and collaborated with artists such as Jessie Kleemann, Sonya Kelliher-Combs, Bolatta Silis-Høegh and Inuk Silis-Høegh and his writing has appeared in Kunst og Kultur, Kritik, Decolonization: Indigeneity, Education and Society, Neriusaaq, First American Art Magazine and exhibition catalogues for Nuuk Art Museum.

[8] In the artist’s words, “I have always been fascinated by our ancestors’ culture, ornamentation, aesthetics and carefulness.” Quoted in Olsen (ed), Kimik – ukiut 20 år, 38. 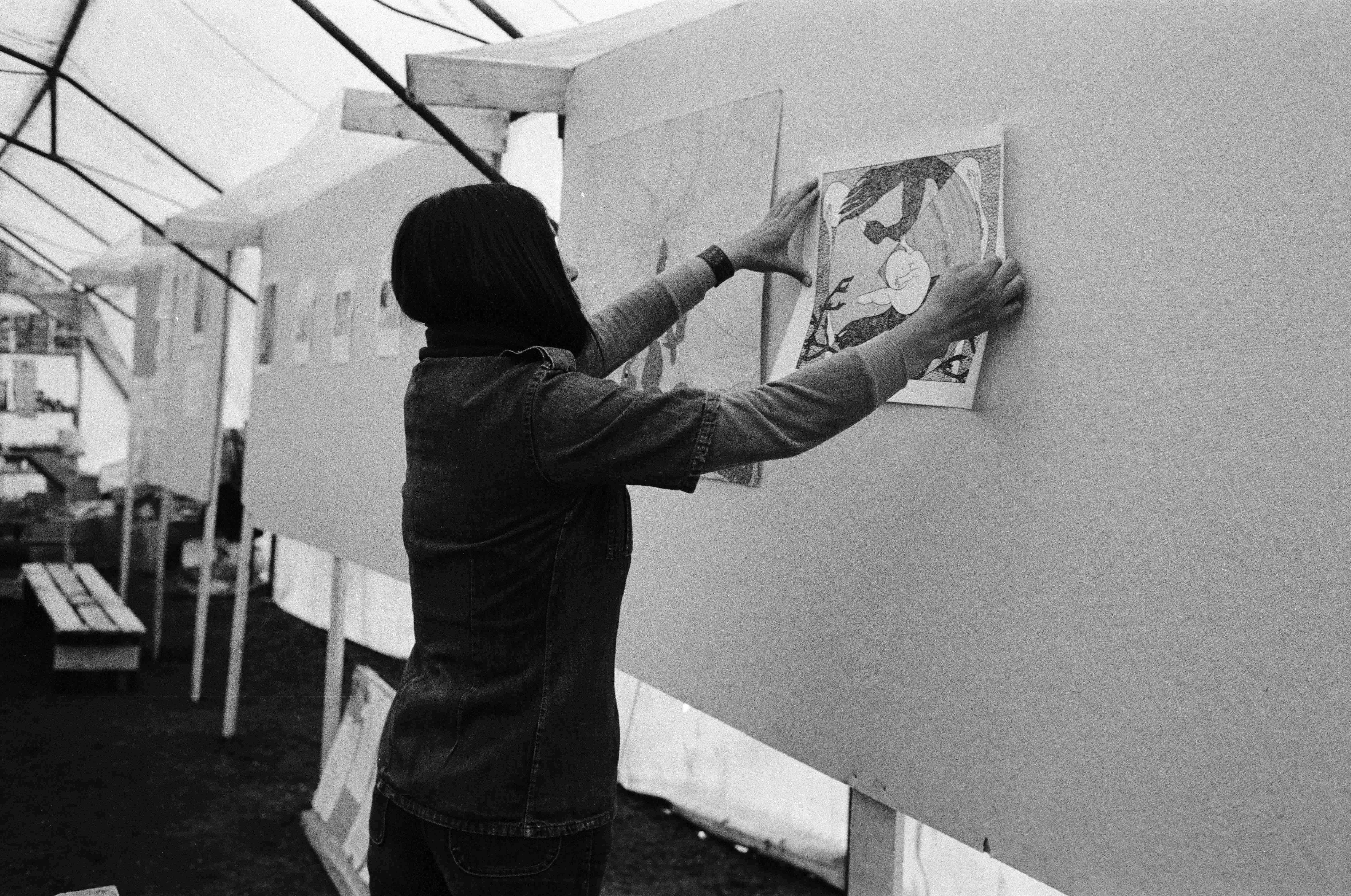 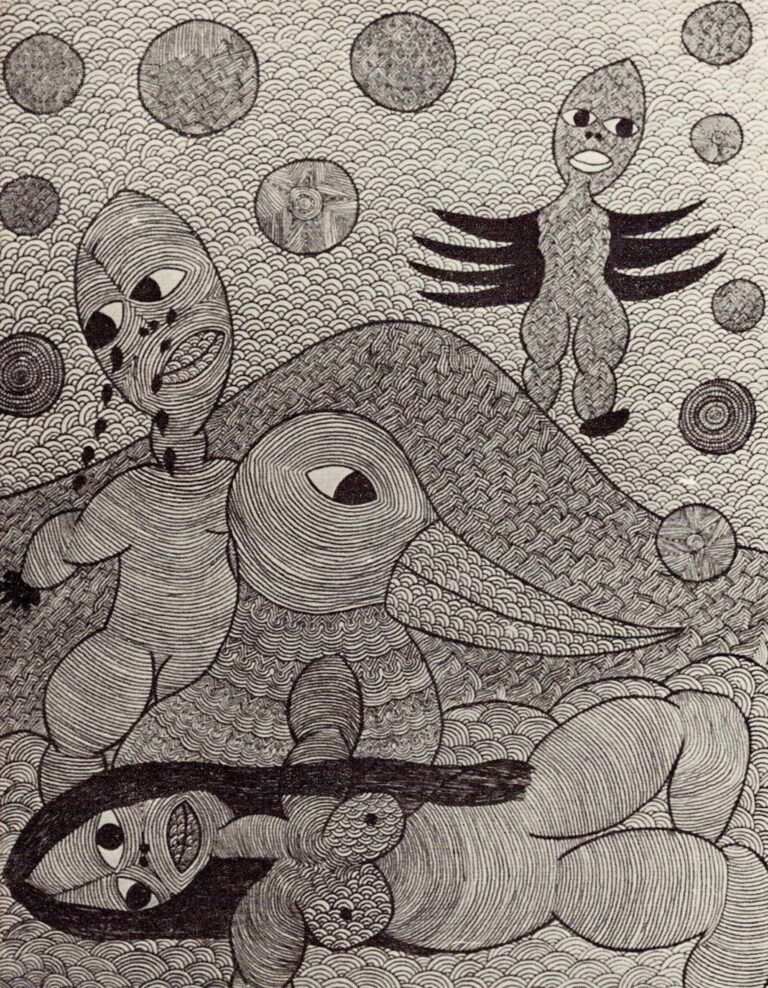 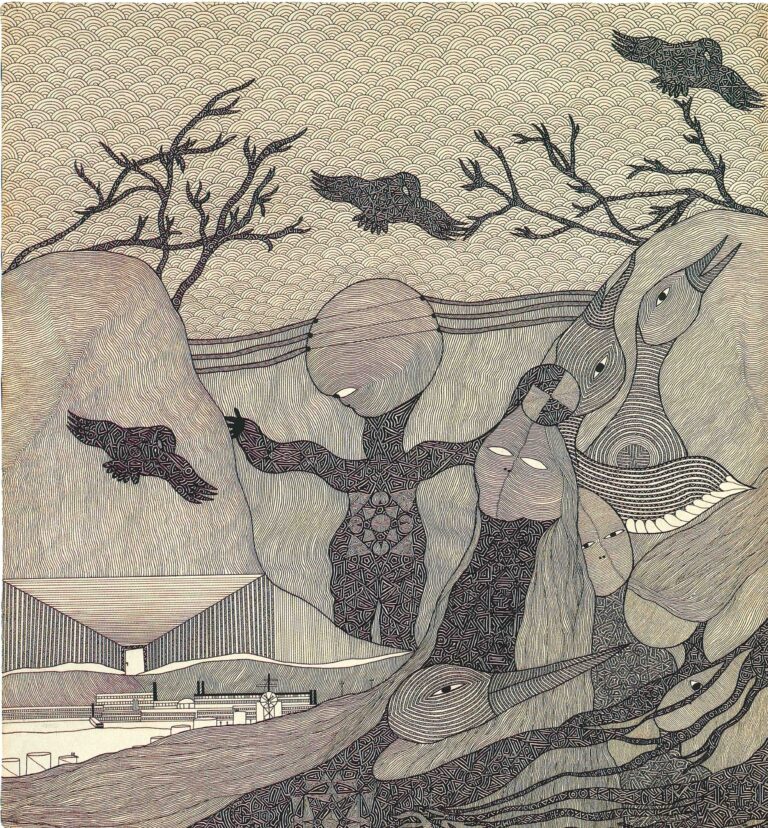 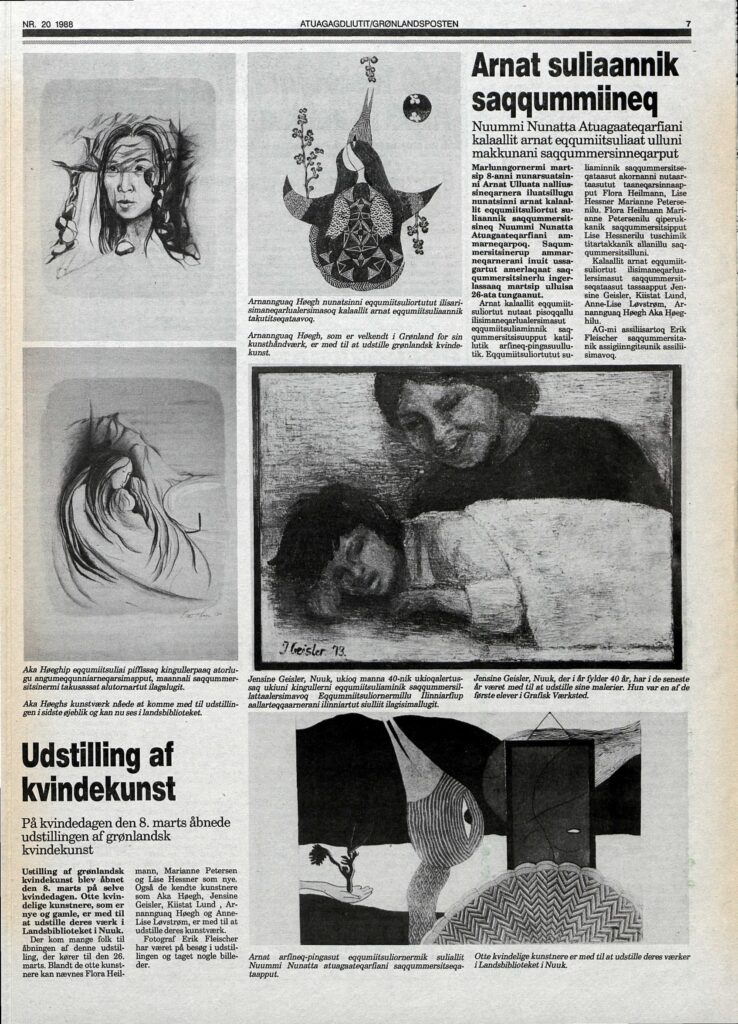